Many of the Science News staff’s favorite books of the year challenge how we understand the world, from rethinking human history to reimagining the toilet. For a satisfying read, you can’t go wrong with any of these books, including a couple by our Science News colleagues. Find in-depth reviews here.

The Dawn of Everything
David Graeber and David Wengrow
Farrar, Straus and Giroux
$35

This provocative history challenges the conventional wisdom that societies progressed through a series of stages that inevitably led to inequalities — instead arguing that people have experimented with a variety of social systems since the Stone Age (SN: 11/6/21, p. 34).

It’s impossible to pinpoint just one thing that makes humans human. But DeSilva, a paleoanthropologist, argues that the emergence of upright walking led our ancestors down an evolutionary path that resulted in the features that make humans unique (SN: 4/24/21, p. 28).

By considering the supposed hallmarks of life, and the exceptions to the rules, this book tackles one of biology’s thorniest questions: What makes something alive? (SN: 3/27/21, p. 28).

Just after winning the Nobel Prize in chemistry, Jennifer Doudna is the subject of a biography that looks at her foundational work on CRISPR/Cas9 and delves into the ethics of gene editing (SN: 3/27/21, p. 29).

In this moving memoir, Simard recounts how she went from working at a logging company to becoming an ecologist and uncovering the hidden underground networks that connect the trees within a forest (SN: 7/3/21 & 7/17/21, p. 36).

In this lively tour of toilets around the world, readers meet scientists, activists and entrepreneurs who are finding creative ways to increase access to sanitation and make the management of human waste more environmentally sustainable (SN: 4/10/21, p. 29).

Keefe, a staff writer at the New Yorker, investigates how the actions of three generations of the Sackler family — owners of the pharmaceutical company that made the painkiller OxyContin — set the stage for the opioid crisis.

Gordin, a historian, reviews astrology, alchemy, eugenics and other subjects — many
of which were once considered mainstream science — to show how challenging it is to define pseudoscience (SN: 8/28/21, p. 30).

In the mid-20th century, George Gamow and Fred Hoyle stood on opposite sides of a great debate over how the universe began. By recounting the careers of these dueling physicists, this book traces how the Big Bang theory and modern cosmology came to be (SN: 8/28/21, p. 30).

Astronomer Vera Rubin provided key evidence for the existence of dark matter, an invisible substance now thought to account for the majority of the universe’s mass. In this biography, Yeager, Science News’ associate news editor, looks at how Rubin persevered in the face of skepticism of her work and the sexism that pervaded science in the mid-20th century (SN: 8/14/21, p. 29).

Readers with a morbid curiosity look no further. Engelhaupt, a frequent contributor to Science News, entertains with stories about topics that are not suitable for polite conversation. Everything from fecal transplants to leggy insects, face mites and other critters that just might give you the heebie-jeebies makes the cut (SN: 2/27/21, p. 29).

Buy these books from Bookshop.org. Science News is a Bookshop.org affiliate and will earn a commission on purchases made from links in this article. 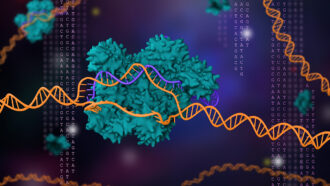