Tiny, pond-dwelling Halteria ciliates are virovores, able to survive on a virus-only diet, researchers report December 27 in Proceedings of the National Academy of Sciences. The single-celled creatures are the first known to thrive when viruses alone are on the menu.

Scientists already knew that some microscopic organisms snack on aquatic viruses such as chloroviruses, which infect and kill algae. But it was unclear whether viruses alone could provide enough nutrients for an organism to grow and reproduce, says ecologist John DeLong of the University of Nebraska–Lincoln.

In laboratory experiments, Halteria that were living in water droplets and given only chloroviruses for sustenance reproduced, DeLong and colleagues found. As the number of viruses in the water dwindled, Halteria numbers went up. Ciliates without access to viral morsels, or any other food, didn’t multiply. But Paramecium, a larger microbe, didn’t thrive on a virus-only diet, hinting that viruses can’t satisfy the nutritional requirements for all ciliates to grow.

Viruses could be a good source of phosphorus, which is essential for making copies of genetic material, DeLong says. But it probably takes a lot of viruses to account for a full meal.

In the lab, each Halteria microbe ate about 10,000 to 1 million viruses daily, the team estimates. Halteria in small ponds with abundant viral snacks might chow down on about a quadrillion viruses per day.

These feasts could shunt previously unrecognized energy into the food web, and add a new layer to the way viruses move carbon through an ecosystem — if it happens in the wild, DeLong says (SN: 6/9/16). His team plans to start finding out once ponds in Nebraska thaw.

Lab experiments show that Halteria ciliates can chow down solely on viruses. Whether these “virovores” do the same in the wild is unclear. 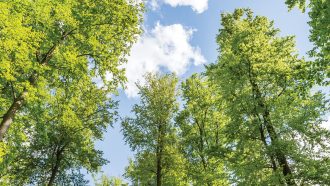