Protons may be intrinsically charming.

The subatomic particles are a mash-up of three lighter particles called quarks: two of the type known as up quarks and one down quark. But physicists have speculated for decades that protons may also host more massive quarks, called “intrinsic” charm quarks. A new analysis supports that idea, physicists report in the Aug. 18 Nature.

Charm quarks are much heavier than up or down quarks. So heavy that, mind-bendingly, “you can have a component of the proton which is heavier than the proton itself,” says theoretical physicist Juan Rojo of Vrije Universiteit Amsterdam.

Rojo and colleagues combined a variety of experimental results and theoretical calculations in hopes of unveiling the proton’s hypothetical charm. Measuring this feature is key to fully understanding one of the most important particles in the universe, Rojo says.

Physicists know that the more deeply you probe a proton, the more complicated it appears. When observed at very high energies, as in collisions at particle accelerators like the Large Hadron Collider, or LHC, near Geneva, protons contain a motley crew of transient quarks and their antimatter counterparts, antiquarks (SN: 4/18/17). Such “extrinsic” quarks are created when gluons, particles that help “glue” the quarks together inside protons, split into quark-antiquark pairs.

Extrinsic quarks aren’t fundamental to the identity of the proton. They’re simply a result of how gluons behave at high energies. But charm quarks might exist inside protons even at low energies, in a more persistent, deep-seated form.

In quantum physics, particles don’t take on a definite state until they’re measured — they are instead described by probabilities. If protons contain intrinsic charm, there’d be a small probability to find within a proton not only two up quarks and a down quark, but also a charm quark and antiquark. Since protons aren’t well-defined collections of individual particles, a proton’s mass isn’t a simple sum of its parts (SN: 11/26/18). The small probability means that the full mass of the charm quark and antiquark isn’t added to the proton’s heft, explaining how the proton may contain particles heavier than itself.

Using thousands of measurements from experiments at the LHC and other particle accelerators, combined with theoretical calculations, the team found evidence for intrinsic charm in the proton at a statistical level called 3 sigma. The intrinsic charm quarks carry about 0.6 percent of a proton’s momentum, the researchers report.

But 5 sigma is typically required for a conclusive result. “The data and analysis are not yet sufficient … to get from ‘evidence for’ to ‘discovery of’ intrinsic charm,” says Ramona Vogt, a theoretical physicist at Lawrence Livermore National Laboratory in California who wrote a perspective piece on the study for Nature.

Notably, the new analysis incorporates results from the LHCb collaboration, which reported measurements potentially consistent with intrinsic charm in the proton in the Feb. 25 Physical Review Letters. Including that data in the analysis is “what’s really new,” says theoretical physicist C.-P. Yuan of Michigan State University in East Lansing. But Yuan has reservations about the type of calculation used to interpret the data. “It’s not done at what we today call the state-of-art analysis.”

Scientists need to pin down the proton’s intrinsic charm content to better understand results at the LHC and other facilities that smash protons together and observe what comes out. Researchers have to be able to gauge the ins and outs of the objects they’re colliding.

Data from future accelerators such as the planned Electron-Ion Collider could help, says theoretical physicist Tim Hobbs of Fermilab in Batavia, Ill. For now, the proton remains mysterious. “The problem is still with us; it remains very challenging.”

The massive quarks — counterintuitively heavier than the proton itself — might carry about 0.6 percent of a proton’s momentum. 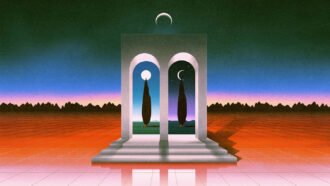