CHICAGO — An entire ocean of liquid magma, or maybe a hot heart of solid metal, may lurk in Io’s underworld.

The surface of Jupiter’s innermost moon is covered in scorching lava lakes and gored by hundreds of active volcanoes, some spitting molten rock dozens of kilometers high (SN: 8/6/14). Over the years, the moon’s restless, mesmerizing hellscape has attracted the attention of many planetary scientists (SN: 5/3/22).

Now, researchers are digging into the nature of Io’s infernal interior to explain what is driving the spectacular volcanism on the moon’s fiery surface. “It’s the most volcanically active place in the solar system,” says planetary scientist Samuel Howell of NASA’s Jet Propulsion Laboratory in Pasadena, Calif. “But it’s not really clear where that energy comes from.”

Researchers generally agree that Io gets most of its energy from a gravitational tug-of-war between its parent planet Jupiter and its sibling moon Europa. Those grand forces pull on Io’s rocky body, generating tremendous frictional heat in its interior. But how that heat is stored and moved around remains a mystery.

One explanation is that Io’s netherworld may house an enormous ocean of liquid magma, planetary scientist David Stevenson of Caltech said December 15 at the American Geophysical Union’s fall meeting. Though the exact size of the proposed molten sea remains uncertain, it would need to be relatively large, he said. “The magma ocean could be, say, 100 kilometers thick.”

In 2011, researchers reported that Io’s mantle couldn’t be completely solid. Magnetic measurements of Io from the Galileo spacecraft indicated there must be an electrically conductive layer inside the moon. A global underground layer containing molten rock, the scientists wrote, would fit the bill.

Hot spots speckle the surface of the volcanic moon Io in this infrared image captured by NASA’s Juno spacecraft on July 5, 2022, when the spacecraft was about 80,000 kilometers from the moon.JPL-Caltech/NASA, SwRI, ASI, INAF, JIRAM

But the researchers couldn’t tell whether that layer would consist of a continuous sea of magma or many little pockets of molten rock dispersed throughout solid rock, resembling a soggy sponge.

Building off that previous work, Stevenson and Caltech geophysicist Yoshinori Miyazaki calculated that a mixed layer of magma and solid rock beneath Io’s crust would be fundamentally unstable under the amount of heating they predict occurs inside the moon. The molten rock and solid rock would split into distinct layers, with the molten rock coalescing into a subsurface sea, Stevenson said. “The final conclusion is [that] Io has a magma ocean.”

But there are other possibilities. “A lot of information is consistent with a large, global conductive layer that could be a magma ocean,” Howell says. “But I wouldn’t say there’s consensus on how to interpret that data.”

Instead, the truth may lie within Io’s heart, where a core made of solid metal may lurk, Howell reported December 15 at the meeting. Previous research has suggested that Io has a core rich in metals. Howell and colleagues calculate that a metal core that’s about as rigid as solid ice and a rocky mantle as viscous as Earth’s could fully dispense the immense quantities of heat that Io is estimated to emit. That would fulfill the energy-shedding role of a magma ocean.

Future measurements collected by NASA’s ongoing Juno mission as well two future spacecraft — NASA’s Europa Clipper and the European Space Agency’s JUICE — may provide the data needed to determine whether either, or some combination, of the hypotheses is correct, Stevenson and Howell said (SN: 12/15/22). Until then, the mystery of what dwells in Io’s dark depths may have to remain in purgatory. 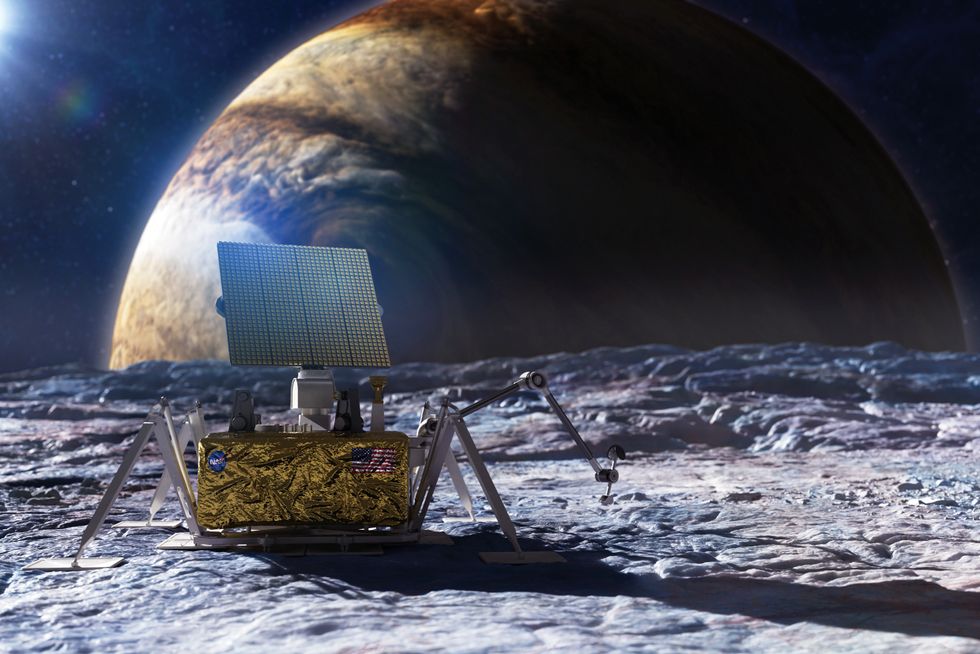 Europa, one of Jupiter’s Galilean moons, has twice as much liquid water as Earth’s oceans, if not more. An ocean estimated to be anywhere from…