In real life here on Earth, a group of natural metals known as the rare earths has made possible our own technology-powered society. Demand for these crucial components in nearly all modern electronics is skyrocketing.

Rare earths fulfill thousands of different needs — cerium, for instance, is used as a catalyst to refine petroleum, and gadolinium captures neutrons in nuclear reactors. But these elements’ most outstanding capabilities lie in their luminescence and magnetism.

We rely on rare earths to color our smartphone screens, fluoresce to signal authenticity in euro banknotes and relay signals through fiber-optic cables across the seafloor. They are also essential for building some of the world’s strongest and most reliable magnets. They generate sound waves in your headphones, boost digital information through space and shift the trajectories of heat-seeking missiles. Rare earths are also driving the growth of green technologies, such as wind energy and electric vehicles, and may even give rise to new components for quantum computers.

“The list just goes on and on,” says Stephen Boyd, a synthetic chemist and independent consultant. “They’re everywhere.”

The rare earths are the lanthanides — lutetium and all 14 elements between lanthanum and ytterbium across one row of the periodic table — plus scandium and yttrium, which tend to occur in the same ore deposits and have similar chemical properties to the lanthanides. These gray to silvery metals are often malleable with high melting and boiling points.

Their secret powers lie in their electrons. All atoms have a nucleus surrounded by electrons, which inhabit zones called orbitals. Electrons in the orbitals farthest from the nucleus are the valence electrons, which participate in chemical reactions and form bonds with other atoms.

Most lanthanides possess another important set of electrons called the “f-electrons,” which dwell in a Goldilocks zone located near the valence electrons but slightly closer to the nucleus. “It’s these f-electrons that are responsible for both the magnetic and luminescent properties of the rare earth elements,” says Ana de Bettencourt-Dias, an inorganic chemist at the University of Nevada, Reno.

Place on the periodic table

The rare earths are a group of 17 elements (highlighted in blue on the periodic table). A subset of rare earths known as the lanthanides (lutetium, Lu, plus the row starting with lanthanum, La) each contain a subshell that typically houses f-electrons, which bestow the elements with magnetic and luminescent properties.

Along some coasts, the night sea occasionally glows bluish green as bioluminescent plankton are jostled in the waves. Rare earth metals also radiate light when stimulated. The trick is to tickle their f-electrons, de Bettencourt-Dias says.

Using an energy source like a laser or lamp, scientists and engineers can jolt one of a rare earth’s f-electrons into an excited state and then let it fall back into lethargy, or its ground state. “When the lanthanides come back to the ground state,” she says, “they emit light.”

Each rare earth reliably emits precise wavelengths of light when excited, de Bettencourt-Dias says. This dependable precision allows engineers to carefully tune electromagnetic radiation in many electronics. Terbium, for instance, emits light at a wavelength of about 545 nanometers, making it good for constructing green phosphors in television, computer and smartphone screens. Europium, which has two common forms, is used to build red and blue phosphors. All together, these phosphors can paint screens with most shades of the rainbow.

Rare earths also radiate useful invisible light. Yttrium is a key ingredient in yttrium-aluminum-garnet, or YAG, a synthetic crystal that forms the core of many high-powered lasers. Engineers tune the wavelengths of these lasers by lacing YAG crystals with another rare earth. The most popular variety are neodymium-laced YAG lasers, which are used for everything from slicing steel to removing tattoos to laser range-finding. Erbium-YAG laser beams are a good option for minimally invasive surgeries because they’re readily absorbed by water in flesh and thus won’t slice too deep.

See how the europium in embedded fibers in a Euro banknote fluoresces under ultraviolet light. The UV light excites the europium’s f-electrons, which then fall back into their ground state and release photons of visible light in the process.

Beyond lasers, lanthanum is crucial for making the infrared-absorbing glass in night vision goggles. “And erbium drives our internet,” says Tian Zhong, a molecular engineer at the University of Chicago. Much of our digital information travels through optical fibers as light with a wavelength of about 1,550 nanometers — the same wavelength erbium emits. The signals in fiber-optic cables dim as they travel far from their source. Because those cables can stretch for thousands of kilometers across the seafloor, erbium is added to fibers to boost signals.

Less than 80 years later, the ubiquitous smartphone — boasting far more computing power than ENIAC ever did — fits snugly in our palms. Society owes this miniaturization of electronic technology in large part to the exceptional magnetic power of the rare earths. Tiny rare earth magnets can do the same job as larger magnets made without rare earths.

It’s those f-electrons at play. Rare earths have many orbitals of electrons, but the f-electrons inhabit a specific group of seven orbitals called the 4f-subshell. In any subshell, electrons try to spread themselves out among the orbitals within. Each orbital can house up to two electrons. But since the 4f-subshell contains seven orbitals, and most rare earths contain fewer than 14 f-electrons, the elements tend to have multiple orbitals with just one electron. Neodymium atoms, for instance, possess four of these loners, while dysprosium and samarium have five. Crucially, these unpaired electrons tend to point — or spin — in the same direction, Boyd says. “That’s what creates the north and the south poles that we classically understand as magnetism.”

Since these lone f-electrons flitter behind a shell of valence electrons, their synchronized spins are somewhat shielded from demagnetizing forces such as heat and other magnetic fields, making them great for building permanent magnets, Zhong says. Permanent magnets, like the ones that hold up pictures on a fridge door, passively generate magnetic fields that arise from their atomic structure, unlike electromagnets, which require an electric current and can be turned off.

But even with their shielding, the rare earths have limits. Pure neodymium, for example, readily corrodes and fractures, and its magnetic pull begins to lose strength above 80° Celsius. So manufacturers alloy some rare earths with other metals to make more resilient magnets, says Durga Paudyal, a theoretical physicist at Ames National Laboratory in Iowa. This works well because some rare earths can orchestrate the magnetic fields of other metals, he says. Just as weighted dice will preferentially land on one side, some rare earths like neodymium and samarium exhibit stronger magnetism in certain directions because they contain unevenly filled orbitals in their 4f-subshells. This directionality, called magnetic anisotropy, can be leveraged to coordinate the fields of other metals like iron or cobalt to formulate robust, extremely powerful magnets.

The most powerful rare earth alloy magnets are neodymium-iron-boron magnets. A three-kilogram neodymium alloy magnet can lift objects that weigh over 300 kilograms, for instance. More than 95 percent of the world’s permanent magnets are made from this rare earth alloy. Neodymium-iron-boron magnets generate vibrations in smartphones, produce sounds in earbuds and headphones, enable the reading and writing of data in hard disk drives and generate the magnetic fields used in MRI machines. And adding a bit of dysprosium to these magnets can boost the alloy’s heat resistance, making it a good choice for the rotors that spin in the hot interiors of many electric vehicle motors.

Samarium-cobalt magnets, developed in the 1960s, were the first popular rare earth magnets. Though slightly weaker than neodymium-iron-boron magnets, samarium-cobalt magnets have superior heat and corrosion resistance, so they’re put to work in high-speed motors, generators, speed sensors in cars and airplanes, and in the moving parts of some heat-seeking missiles. Samarium-cobalt magnets also form the heart of most traveling-wave tubes, which boost signals from radar systems and communications satellites. Some of these tubes are transmitting data from the Voyager 1 spacecraft — currently the most distant human-made object — over 23 billion kilometers away (SN: 7/31/21, p. 18).

Because they are strong and reliable, rare earth magnets are supporting green technologies. They’re in the motors, drivetrains, power steering and many other components of electric vehicles. Tesla’s use of neodymium alloy magnets in its farthest-ranging Model 3 vehicles has sparked supply chain worries; China provides the vast majority of the world’s neodymium (SN: 1/11/23).

Rare earth magnets are also used in many offshore wind turbines to replace gearboxes, which boosts efficiency and decreases maintenance. In August, Chinese engineers introduced “Rainbow,” the world’s first maglev train line based on rare earth magnets that enable the trains to float without consuming electricity.

It may be too early to predict exactly how the rare earth metals will continue to influence the expansion of these growing technologies. But it’s probably safe to say: We’re going to need more rare earths.

Because of their unique chemistry, the rare earth elements can fine-tune light for many different purposes and generate powerful magnetic fields. 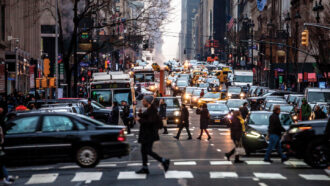 A 1920s science headline, “Ice cream from crude oil,” may best capture the era’s unbridled enthusiasm for chemistry. “Edible fats, the same as those in… 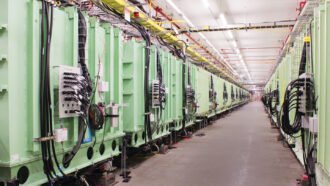