CHICAGO – In January 2022, a cyclone blitzed a large expanse of ice-covered ocean between Greenland and Russia. Frenzied gusts galvanized 8-meter-tall waves that pounded the region’s hapless flotillas of sea ice, while a bombardment of warm rain and a surge of southerly heat laid siege from the air.

Six days after the assault began, about a quarter, or roughly 400,000 square kilometers, of the vast area’s sea ice had disappeared, leading to a record weekly loss for the region.

The storm is the strongest Arctic cyclone ever documented. But it may not hold that title for long. Cyclones in the Arctic have become more frequent and intense in recent decades, posing risks to both sea ice and people, researchers reported December 13 at the American Geophysical Union’s fall meeting. “This trend is expected to persist as the region continues to warm rapidly in the future,” says climate scientist Stephen Vavrus of the University of Wisconsin–Madison.

The Arctic Circle is warming about four times as fast as the rest of Earth (SN: 8/11/22). A major driver is the loss of sea ice due to human-caused climate change. The floating ice reflects far more solar radiation back into space than naked seas do, influencing the global climate (SN: 10/14/21). During August, the heart of the sea ice melting season, cyclones have been observed to amplify sea ice losses on average, exacerbating warming.

There’s more: Like hurricanes can ravage regions farther south, boreal vortices can threaten people living and traveling in the Arctic (SN: 12/11/19). As the storms intensify, “stronger winds pose a risk for marine navigation by generating higher waves,” Vavrus says, “and for coastal erosion, which has already become a serious problem throughout much of the Arctic and forced some communities to consider relocating inland.”

Climate change is intensifying storms farther south (SN: 11/11/20). But it’s unclear how Arctic cyclones might be changing as the world warms. Some previous research suggested that pressures, on average, in Arctic cyclones’ cores have dropped in recent decades. That would be problematic, as lower pressures generally mean more intense storms, with “stronger winds, larger temperature variations and heavier rainfall [and] snowfall,” says atmospheric scientist Xiangdong Zhang of the University of Alaska Fairbanks.

But inconsistencies between analyses had prevented a clear trend from emerging, Zhang said at the meeting. So he and his colleagues aggregated a comprehensive record, spanning 1950 to 2021, of Arctic cyclone timing, intensity and duration.

Arctic cyclone activity has intensified in strength and frequency over recent decades, Zhang reported. Pressures in the hearts of today’s boreal vortices are on average about 9 millibars lower than in the 1950s. For context, such a pressure shift would be roughly equivalent to bumping a strong category 1 hurricane well into category 2 territory. And vortices became more frequent during winters in the North Atlantic Arctic and during summers in the Arctic north of Eurasia.

In the last decade, strong vortices — with central pressures lower than 990 millibars — appeared in the Arctic more often each year, on average, than in the 1950s, up about 20 percent in the winter and 35 percent in the summer.

What’s more, August cyclones appear to be damaging sea ice more than in the past, said meteorologist Peter Finocchio of the U.S. Naval Research Laboratory in Monterey, Calif. He and his colleagues compared the response of northern sea ice to summer cyclones during the 1990s and the 2010s.

August vortices in the latter decade were followed by a 10 percent loss of sea ice area on average, up from the earlier decade’s 3 percent loss on average. This may be due, in part, to warmer water upwelling from below, which can melt the ice pack’s underbelly, and from winds pushing the thinner, easier-to-move ice around, Finocchio said.

With climate change, cyclones may continue intensifying in the spring too, climate scientist Chelsea Parker said at the meeting. That’s a problem because spring vortices can prime sea ice for later summer melting.

Parker, of NASA’s Goddard Space Flight Center in Greenbelt, Md., and her colleagues ran computer simulations of spring cyclone behavior in the Arctic under past, present and projected climate conditions. By the end of the century, the maximum near-surface wind speeds of spring cyclones — around 11 kilometers per hour today — could reach 60 km/h, the researchers found. And future spring cyclones may keep swirling at peak intensity for up to a quarter of their life spans, up from around 1 percent today. The storms will probably travel farther too, the team says.

“The diminishing sea ice cover will enable the warmer Arctic seas to fuel these storms and probably allow them to penetrate farther into the Arctic,” says Vavrus, who was not involved in the research.

Parker and her team plan to investigate the future evolution of Arctic cyclones in other seasons, to capture a broader picture of how climate change is affecting the storms.

For now, it seems certain that Arctic cyclones aren’t going anywhere. What’s less clear is how humankind will contend with the storms’ growing fury.

Over the last 70 years, boreal storms have steadily grown stronger. And climate change may make them worse, threatening both people and sea ice. 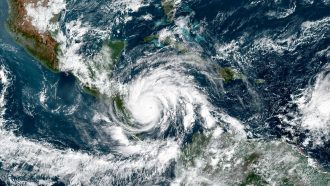 Climate change is helping Atlantic hurricanes pack more of a punch, making them rainier, intensifying them faster and helping the storms linger longer even after…