Living through the COVID-19 pandemic may have matured teens’ brains beyond their years.

From online schooling and social isolation to economic hardship and a mounting death count, the last few years have been rough on young people. For teens, the pandemic and its many side effects came during a crucial window in brain development.

Now, a small study comparing brain scans of young people from before and after 2020 reveals that the brains of teens who lived through the pandemic look about three years older than expected, scientists say.

This research, published December 1 in Biological Psychiatry: Global Open Science, is the first to look at the impact of the pandemic on brain aging.

The finding reveals that “the pandemic hasn’t been bad just in terms of mental health for adolescents,” says Ian Gotlib, a clinical neuroscientist at Stanford University. “It seems to have altered their brains as well.”

The study can’t link those brain changes to poor mental health during the pandemic. But “we know there is a relationship between adversity and the brain as it tries to adapt to what it’s been given,” says Beatriz Luna, a developmental cognitive neuroscientist at the University of Pittsburgh, who wasn’t involved in the research. “I think this is a very important study that sets the ball rolling for us to look at this.”

The roots of this study date back to nearly a decade ago, when Gotlib and his colleagues launched a project in California’s Bay Area to study depression in adolescents. The researchers were collecting information on the mental health of the kids in the study, and did MRI scans of their brains.

Lockdown orders in the spring of 2020 forced the researchers to stop the project. When they restarted a year later, Gotlib worried that stress from the pandemic threatened to skew their results.

It turned out that the kids making their way back to the study after a year of pandemic life were reporting higher rates of anxiety and depression than their peers from before 2020. So, the team decided to compare brain scans captured before the start of the pandemic with scans taken between October 2020 and March 2022.

The researchers looked at differences in 64 scans from each group, matched by the kids’ sex and age, with an average age of around 16 for each group.

The results were “striking,” Gotlib says.

Adolescent brains naturally go through a maturation process that results in the thickening of the hippocampus, an area involved with memory and concentration, and the amygdala, which regulates emotional processing. At the same time, the cortex — an area that regulates emotional functioning — starts thinning.

The brain scans revealed that this maturation process had moved more quickly in teens who had lived through the pandemic. Gotlib says that their brains appeared three to four years older than the brains of the teens scanned before the start of the pandemic.

Exactly what part of the pandemic may have shaped teen brains is unclear. But “this study shows that the pandemic has had a material impact on brain maturation,” says Joan Luby, a child psychiatrist at Washington University School of Medicine in St Louis, who wasn’t involved in the research.

Gotlib suspects that stress is to blame. Previous studies have shown that exposure to violence or negligence can lead to accelerated brain maturation in children. Considering that mental health plummeted for teens during the pandemic (SN: 9/8/22), “it’s not a big leap” to think that the stressful conditions could also have shaped brain development in his study’s cohort, Gotlib says.

But what caused the alterations and what implications they may have are still open questions. Rudolf Uher, a neuroscientist at Dalhousie University in Halifax, Canada, points out that other factors like more screen time due to online schooling could be at play. And he cautions that future research may not back up this study’s findings.

And it’s unclear whether accelerated brain aging has impacted teen health, or if issues will manifest later in life. While researchers can’t say for sure, “if your brain is prematurely aging, that’s generally not a good thing,” Luby says.

Either way, ensuring that people have access to mental health services will be crucial to helping children of the pandemic, Gotlib says.

“These kids are hurting,” he says. “We need to take that seriously and make sure we’re offering them treatment.”

A small study suggests that the COVID-19 pandemic may have aged teen brains beyond their years. 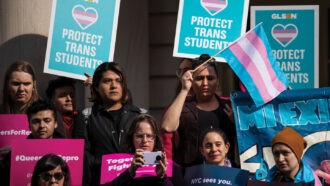 Daniel’s birth certificate is marked “female,” but Daniel is nonbinary — not exclusively male nor female. “I’m masculine leaning,” says the 18-year-old. The disconnect between…