A sacrificed spider monkey is shedding new light on an ancient Mesoamerican relationship.

The remains of a 1,700-year-old monkey found in the ancient city of Teotihuacan outside modern-day Mexico City suggest the primate was a diplomatic gift from the Maya. The find is the earliest evidence of a primate held in captivity in the Americas, researchers report November 21 in Proceedings of the National Academy of Sciences.

Unearthed in 2018 at the base of a pyramid in Teotihuacan, the monkey’s skeleton lay beside the corpses of other animals — including an eagle and several rattlesnakes — in an area of the city where visiting Maya elites may have resided.

Evidence of animal sacrifices, including of predators like jaguars, have been found in the city before. But “up to that point, we did not have any instances of sacrificed primates in Teotihuacan,” says Nawa Sugiyama, an anthropological archaeologist at the University of California, Riverside.

Chemical analysis of the spider monkey’s bones and teeth showed that the female had likely been captured in a humid environment at a young age sometime in the third century. The monkey then lived in captivity for a few years before meeting her end between the years 250 and 300.

The highlands around Mexico City are a long way from the natural habitat of spider monkeys (Ateles geoffroy), which require wet tropical forests to thrive. This fact, along with the presence of Maya murals and vessels, suggests to Sugiyama and her colleagues that the spider monkey was a gift from elite Mayas to the people of Teotihuacan.

The find is an example of diplomatic relations between two cultures that sometimes had violent interactions. Maya hieroglyphs indicated that military forces from Teotihuacan invaded the Maya city of Tikal in 378, marking the start of a roughly 70-year period in which Teotihuacan meddled in Maya politics (SN: 10/22/21).

The “striking” discovery of the monkey shows that relationship between these two cultures far predates the invasion, says David Stuart, an archaeologist and epigraphist at the University of Texas at Austin who was not involved in the study.

“The war of 378 had a long history leading up to it,” he says. “The monkey is a really compelling illustration of this long relationship.”

A 1,700-year-old spider monkey skeleton unearthed at Teotihuacan in Mexico was likely a diplomatic gift from the Maya.

At Teotihuacan, near Mexico City, three giant pyramids rise above the ancient city’s main street, the Avenue of the Dead. The smallest of these is… 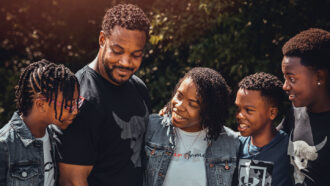 Military towns are the most racially integrated places in the U.S. Here’s why