Venus’ perpetually cloud-shrouded surface remains penetrable only by radio waves. A planetary radar group now reports results of an extended series of radar measurements of the topography of Venus that for the first time provides a view of surface height variations around the entire circumference of the planet.

Those observations were taken by the Arecibo radio telescope in Puerto Rico, which was the most powerful radar system for mapping rocky bodies in outer space until its sudden collapse in December 2020 (SN: 12/19/20 & 1/2/21, p. 8). The observatory also revealed ancient lava flows on Venus and ice on Mercury (SN: 9/18/76, p. 181; SN: 11/9/91, p. 295). Arecibo’s maps of Mars and the asteroid Bennu helped NASA plan the Viking and OSIRIS-REx missions. Some other facilities have planetary radar systems, but they are not as powerful as Arecibo’s was. Astronomers are adding a radar transmitter to West Virginia’s Green Bank Telescope that is expected to rival or exceed Arecibo’s.

50 years ago, Arecibo got an unprecedented view of Venus’ surface 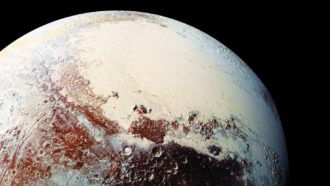 For 76 years, Pluto was the beloved ninth planet. No one cared that it was the runt of the solar system, with a moon, Charon,…